I'm Dying Up Here: My Sunday Night Show and the Changing TV Culture 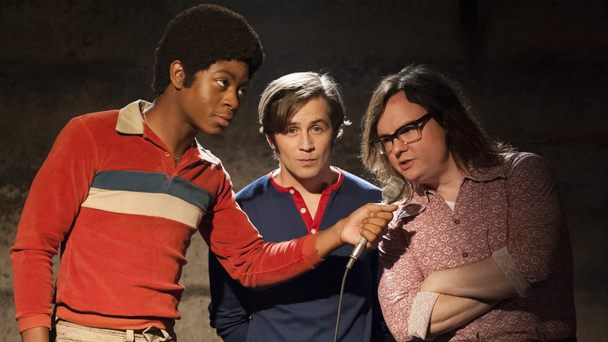 ​I've spent each Sunday night this summer watching I'm Dying Up Here on Showtime.  I look forward to the event as the final bookend of my weekend.  I watch these episodes alone and talk to nobody about what I'd seen come Monday morning.  I'm not sure if anyone I know even watches it, but I'll go ahead and say the show is cruelly ignored on all fronts of the social media circling around my world.

It's a show about standup comedians based out of a Los Angeles club during the seventies.  Some of the comics are young and eager while others are entitled veterans.  Initially, the characters might come off as blunt stereotypes, but as the series unravels so does the depth of each character.  They all face struggles and have their demons and stubbornly make bad decisions.  You feel for them.

The jokes are funny though the issues are serious.  As a result, each episode usually has two major standout moments.  One moment gets me laughing.  Laughing hard.  The other moment is quite devastating for the focused character of the episode.  These harsh moments usually make me stop what I'm doing and whisper "Oh, shit."  While that happens to a different character each episode, the overall screen time between characters is shared fairly.  Some just have bigger roles than others depending on the episode.  I'd go deeper into the issues these characters face, and how it's all woven together, but I'd rather not spoil anything.  It's quite clear early on in the first episode that the show isn't going to be exclusively funny though.  And the fact that there's one major funny moment and one demoralizing moment each night doesn't take away from the rest of the episode.  The rest of the show builds around those two moments.  Those two moments just happen to leave the lasting impression that I'd want to talk about the next morning, had I somebody to talk about them with.

While the funnier moments are more enjoyable, it's the character-wounding big moment of each episode makes me look forward to the next episode.  I don't know about others, but I sure am back every Sunday night.

The Walking Dead is another Sunday night show, but I don't always watch it then.  Before that my Sunday night show was Breaking Bad, which I mostly watched on Sundays, but not always.  And before that was Entourage.  Entourage came along at the perfect time of my coming of age where it seemed like the biggest achievement in the history of moving picture at the time.

Entourage began during the summer that preceded my senior year of high school and took me all the way through college.  Since I was fortunate enough to have parents that subscribed to HBO, my friends would come over to my house to watch Entourage.  Sometimes it was just one friend, sometimes two, but frequently a few.

They didn't just come over and watch a quick episode and leave.  We'd make an event out of the occasion.  They'd come over early and we'd all hang out on the porch among the fireflies and humidity of New England summers.  We'd do our thing up until about a minute before the show began and then ran in and put the TV on the right channel and shut our mouths.  These are memories I cherish.  Not because of the material I saw the show address, but because of the nostalgia of getting together with my friends during those youthful glory days and building something around the show.  Entourage is not simply a show I watched on TV, but rather a former Sunday-night-state-of-mind.  I remember the show more as a feeling than a storyline.  I know now that it wasn't the biggest achievement in the history of moving picture, but it accompanied a great time of my life.

I recall once in college going into the common room of my dorm to use the microwave late one night.  I was surprised to find at least twenty girls huddled together watching America's Next Top Model.  They'd taped pictures of the contestants to the wall and had put a big red X through those already eliminated in previous weeks.  I'm sure these girls think back to America's Next Top Model and remember the experience of watching the show way more than who they were rooting for to win or lose the contest.

Somewhere between watching Entourage and The Walking Dead there was the transition in technology that allowed shows to become more accessible.  First the viewer was given the option of recording shows to watch later.  You could also buy episodes on iTunes.  Then episodes turned up all over the Internet and streaming services seemed to mate with each other and give birth to more.

The importance of planning a night around the airing of a favorite show has faded while convenience has taken priority.  It used to be that if you missed a show you'd have to wait for a replay of it.  That usually happened late at night through the course of the week until the next episode.  If you couldn't catch a replay, well, you were out of luck.  It was almost like shows had to compete with other aspects of your life to retain your attention.  That's still the case, but the stakes are much lower.  People will continue binge-watching something, or at least keep it on as background noise while they multitask around the house.  However, if you didn't stay up to date with a show before streaming developments, you simply gave up on it or waited for the DVD.  Nowadays, you can put off a show for a few weeks before streaming several episodes at once to catch up on it.  Watching what you want when it's convenient for you is a new luxury.

For binge-watchers it's nice to be able to watch several episodes at once because the little details stay fresh and you don't have to wait for closure.

A:  I feel like little details stay fresh anyway, or are recalled by reoccurring thematic moments in a smartly written show that can trigger the memories of those little moments.

B:  The wait is like a drug.  When an episode ends in a mind-blowing way, or teases you with a cliffhanger, the anticipation teases you for a full week, and by the time Sunday night, or Thursday night, or whenever the show you're into rolls around again you wake up in the morning looking forward to closing your day with the it.

"Binging" on episodes doesn't give you the wait.  You know you'll witness the aftermath of what just happened in a matter of minutes once you press the play button on the next episode.  That eliminates the fun of being teased for a full week.  That feeling of oh my God! I can't wait for next week.  Anticipation is what makes life worth living.  Having everything at once takes away from that value.

To have a TV show at the same time each night on a weekly basis adds structure to your life.  The consistency of planning around those episodes not only gives you something to patiently look forward to, but is also better for your overall productivity.  Every now and then I'll give into watching a season or two—maybe three—of a show on Netflix, and get really into it.  Yet I feel like that show overwhelmed my life for however many days it took to complete it.  It was more like I planned entire days around when I'd have time to squeeze in an episode or ten rather than just one night.  I try to limit how many of these Netflix shows I watch because of the habit, but it's tough because the majority of people I know these days have no shame with the habit.  It's what they want to talk about.  It's what they insist you do too.

"You'll finish it in two days," they'll tell you.  "And then we have to talk about it."

While I still don't know anybody who watches I'm Dying Up Here on a weekly basis, almost everybody else tell me about how they just watched this show or that.  But what they really mean is they watched an entire series in one or two sittings.  That's too much to even talk about all at once.  I'd much rather discuss in detail about one episode at a time, and theorize where the show is going.  Instead, bingers will watch a show and tell you about their vague perspective of it, and then are ready to move on.  Theres no looking forward to next week.  There's no theorizing, anticipating, conversing, or salivating.  You take it all in at once and move on to whatever's next.  No attachments, no loyalty.

There's no having that one night a week where your friends gather for an hour or two before watching an episode the night it's released.  There's no more of the nostalgia of the summer nights of 20xx being associated with this show or that; it's simply a weekend wasted away by binging instead.  There goes associating a show with real-life feelings.  With a period of time.  It merely becomes a distant memory packed in between who-knows-whatever else is going on in life.

If I was to go back to my hometown and sit outside the house I grew up in on an August night, I'd feel a reminiscent breeze and see the fireflies light up in a familiar place, and my mind would go back to the summers when I was 18 and hanging out with my friends before watching Entourage.

I hope to continue this tradition as I get older by holding onto a few shows I can watch on a weekly basis.  Shows that will help define a stretch of time in my life.  I just need to find other people to share these experiences with; whether we actually watch together or talk about them the next day.  There must be other non-bingers out there, right?

**An afterthought on I'm Dying Up Here:  The show gets bonus points for reuniting Clark Duke and Jake Lacy.  The two youngest members of The Office during its final season. 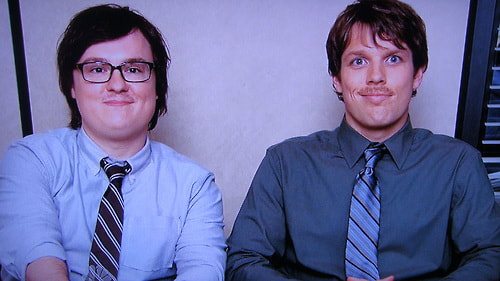