Dipping My Foot in the Cold, Cruel Waters of Tebowmania (2017)

"Was that you up there yelling like a crazed school girl," the Fort Myers Miracle season ticket holder joked to his pal, "when you-know-who parted the sea to take the field?"

It's true, Tim Tebow received a wild cheer when trotting out from the dugout during the bottom of the first.  It was a bigger ovation than he initially received when walking out—long after the first of his teammates—for warm up.  That cheer was swallowed up by the disappointment that he clearly wasn’t about to sign any autographs for the long-waiting cluster of his supporters.  One lucky fan, however, did receive a special souvenir as Tebow accidentally threw a ball well over the head of his warmup partner and into the gawking crowd by the edge of the GA lawn.  It was okay though, Timmy did a sort of salute joined by that awkward grin we've all seen so many times, playing it off like he threw it there on purpose.

I showed up a little before the scheduled start time the previous night to see the Saturday evening game.  Yes, herds of people accompanied me, but the electricity in the air was too much for the Gods of baseball to handle.  That electricity was lightning.  I waited around for over two hours observing the many represented phases of Tebow’s career before the game was finally called. 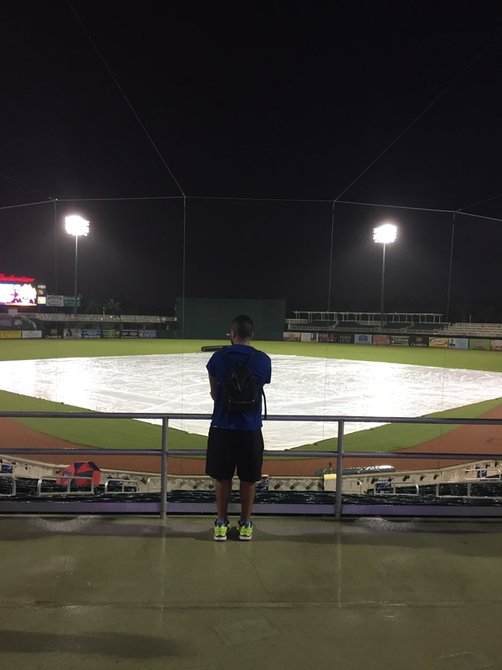 ​I'm not going to lie and say I wasn't excited to see Tebow play ball.  I’d requested tickets for the Friday night opening game of the series but was given Saturday tickets instead.  I couldn't complain.  Free tickets in the first row behind the home team dugout isn't something to nitpick about.  Apparently the Friday game was a pitchers duel until the home team exploded late in the game scoring eleven runs.

After the Saturday rainout, a Sunday doubleheader (seven innings each) was scheduled.  My trade-in ticket was cruelly downgraded to the second row. 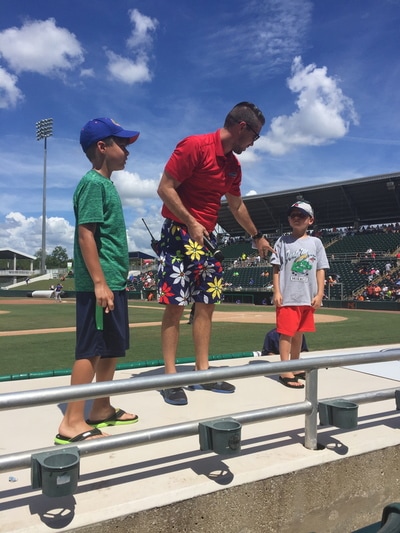 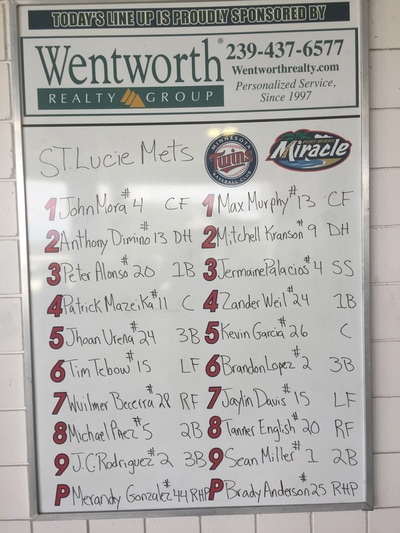 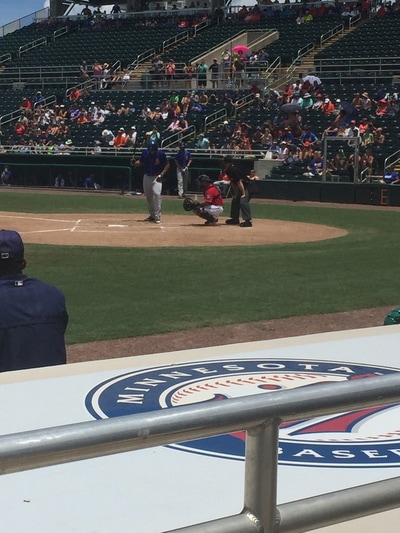 Unlike Friday, the St. Lucie Mets found themselves with an early scoring opportunity after Tebow walked during his first at bat on Sunday.  A walk that prompted a crowd frenzy.  The player batting after him made contact and Tebow turned his wheels trying to go from first to home.  Of course, he was thrown out at the plate and spectators lost their composure for another moment or two.

"It's okay, he doesn’t have to clean the dirt off that uniform," someone joked.  "The holy water will wash it off for him."

I'll come out and say it.  I like Tebow.  I'm a Mets fan so I might be biased, but to be fair, I went to school in Florida during his college football heyday and didn't like him back then.  College football dominates Florida, and I never heard anybody say a bad thing about the guy back then; granted I didn't share the company of many FSU fans in those days.  As for his opportunity to play baseball in the Mets system though, like their management recently confessed, I also admit that it's an entertainment business and he's a good guy for it.  Like it or not, Tebow is great for the lower levels of the game.  He brings a provoking attraction, sells merchandise, and entices energetic reactions for anything he does.

Aside from his personal fan base, regardless of which stage of his legacy lured them in, people love to hate the guy these days.  The fact that people hate on him makes me like him more.  In reality, he's only doing what he wants to do.  Sure, he might get opportunities based on who he is, but so what?  He's following one of his passions and there’s nothing wrong with that.

As for the many stages of his legacy, I saw it all during the two days I spent in Fort Myers while testing my foot in the pool of Tebowmania.  There were more Mets jerseys and t-shirts representing the Tebow name than any other name.  Sure, there were Cespedes, Conforto, and Wright jerseys here or there, but the majority of the Mets gear was branded with the number 15.  There were as many UF shirts or hats as there were Mets.  Some had his name and number, the rest simply implied loyalty to him. 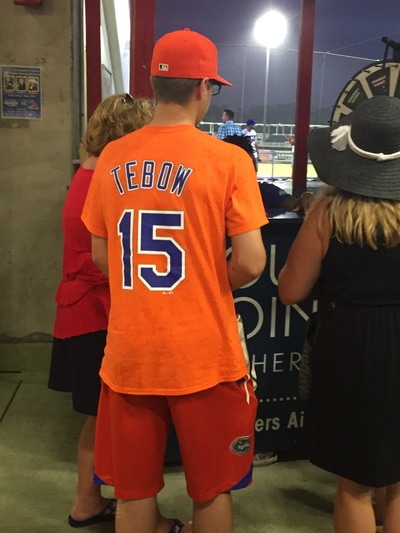 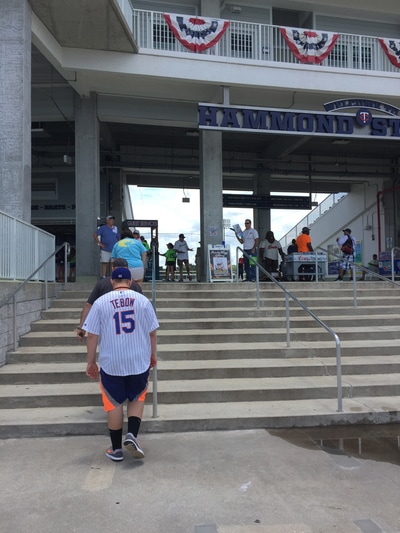 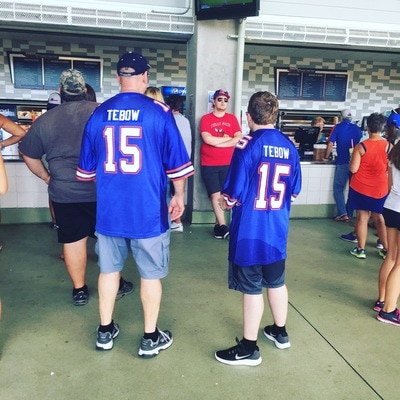 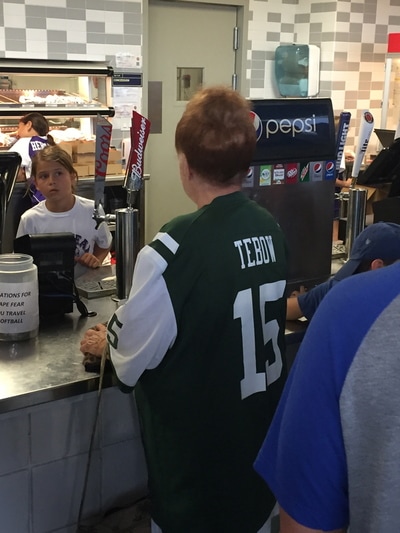 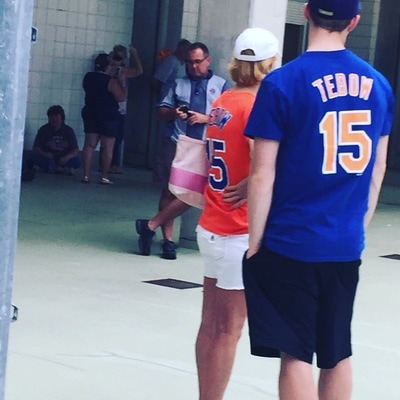 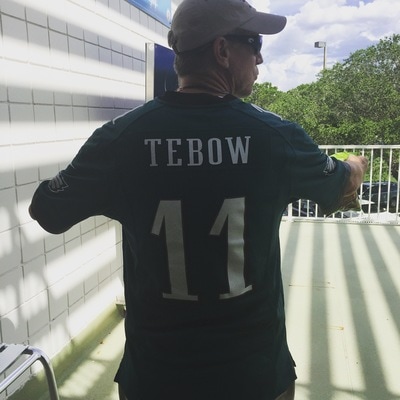 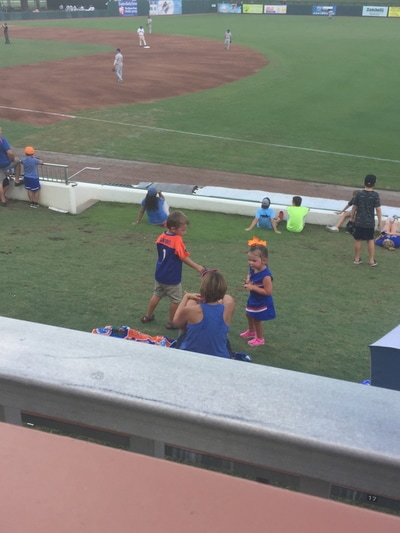 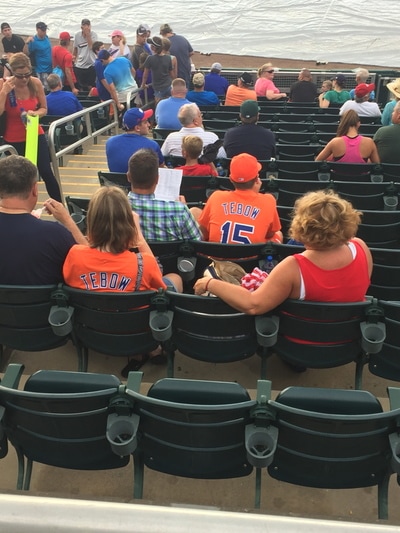 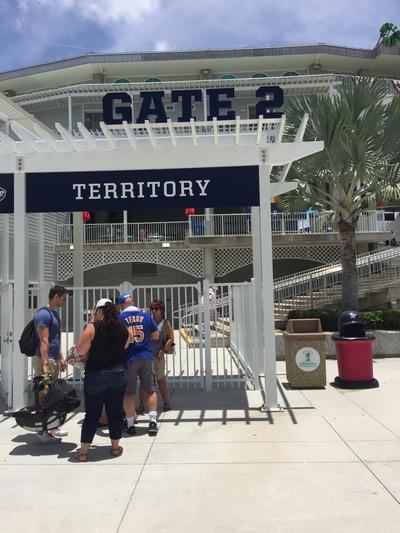 "Of course he went to an orange and blue colored team.  He didn't want to have to change his jockeys."

Adding to the orange and blue, there were plenty of Broncos clothes present on the scene.  Say what you want about Tebow as a professional football player, but I personally watched him deliver several clutch drives at the end of close games that one season, leading his team to victories.  An overtime playoff win culminated that stretch.  It's not his fault Payton Manning took over the following year.  Tebow was never really put in a position to shine after that.

Columbus Fireflies (the South Carolina affiliate below the St. Lucie Mets) shirts were also spotted in at the game.  Some New York Jets gear too.  There were even a few Eagles jerseys despite his brief stay in Philly.  I saw just one Patriots jersey.  With respect for Patriots fans, they knew better than to embrace the hysteria that surrounds Tebow.  That's not a knock on him.  With such a rich history in New England football, they just knew he’d ultimately be a blip on their radar.  And he was.

There was homemade Tebow paraphernalia too.  Custom t-shirts, hats, tattoos.  All that.  Nothing could compare to the getup of an eighty-something year old lady (pictures below).  She had the word “Tebow” and a gator autograph inked onto her forearm twelve years ago.  That’s her only tattoo.  Her orange and blue outfit would have been blinding in any other atmosphere, but it seemed like an admirable tribute in the stands.  Her hat represented all the stages of Tebow, including the Jets, which she was ashamed about.  She was firm to point out that she didn't like the way Rex and the Jets handled Tebow, especially with their public portrayal of him.

After Tebow got thrown out at home during the first game of the Sunday double header, he launched a ball just foul of the left field line.  He then popped out.  Later, he made a catch.  Despite the ninety-four degree heat, this play encouraged critics to get out of their seats and mock the shuffle-step necessary for an outfielder to catch a fly ball.  Tebow is a target, and for those that don't love him, they'll find any and every reason to mock him. 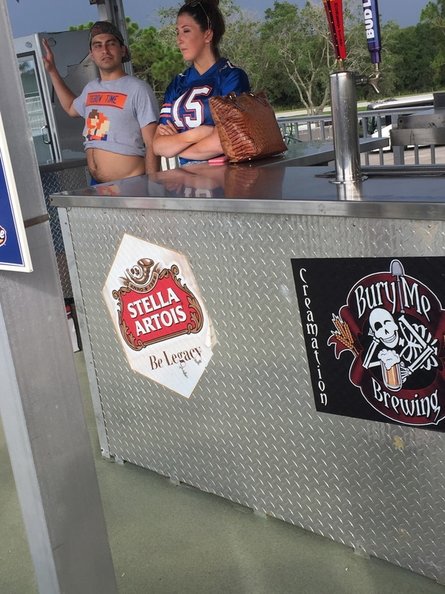 It was announced before the game that a promotion for the night would include a free beer for anybody 21+ if the visiting Tim Tebow secured a hit.  Then, during his first at bat, he was introduced as the "beer batter of the day," which in baseball terms means the guy who strikes out a lot.  This pun brought on laughter from the hometown fans and dugout.  He failed to get a hit.
​
Tebow hit a home run during his first game after getting called up the previous week, but didn't have a spectacular showing in Fort Myers this past weekend.  Did he need to have a spectacular showing?  No.  All that's required of him is to show up and do what he needs to do; play ball and put forth effort.  Tickets will sell wherever he goes.  People will drive for hours to see him play.  They’ll show up early and hope for autographs, or want to hate on him, or just be near him.  They'll cheer for him or throw out jeers.  Some of those jeers are witty, but all are in good fun.  It's quite remarkable how his mere presence adds such energy to the environment.  Baseball games are already one of a kind on their own.  There are no other professional sports you can associate with being outside on pleasant summer nights.  Throw in fireworks, hot dogs, and beer, and you have yourself an American tradition.

Tim Tebow is contributing to the experience of this American tradition of going out to the ball game, so God bless him.  Irony there might be intended. 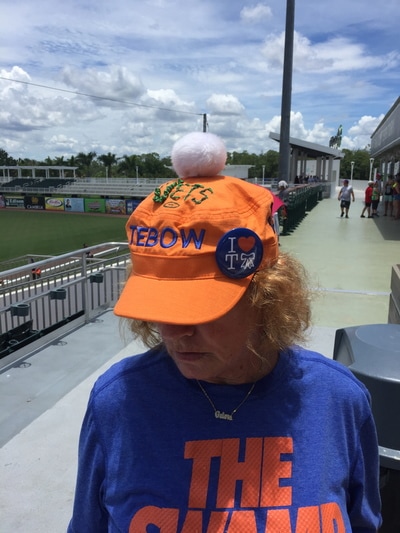 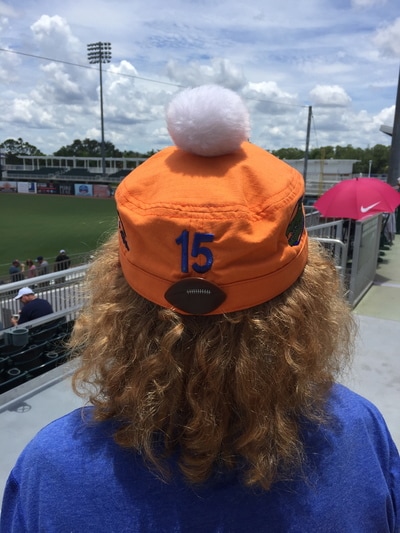 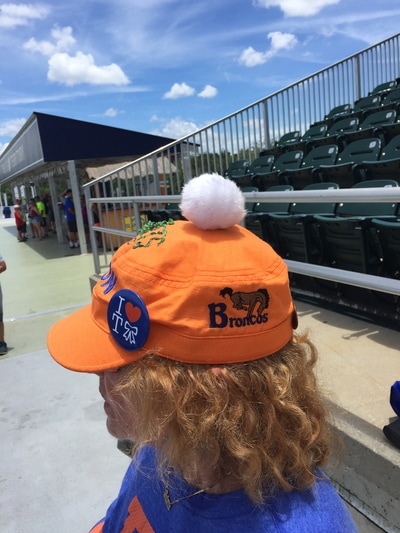 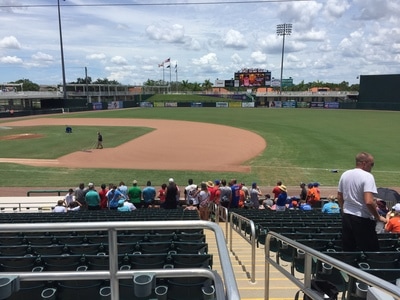 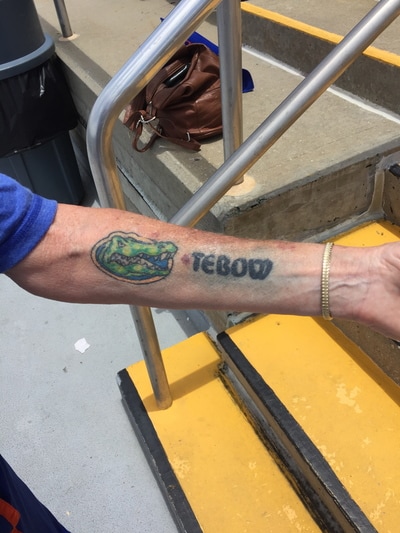 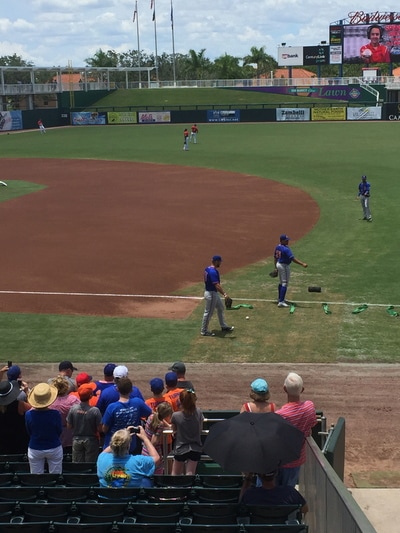 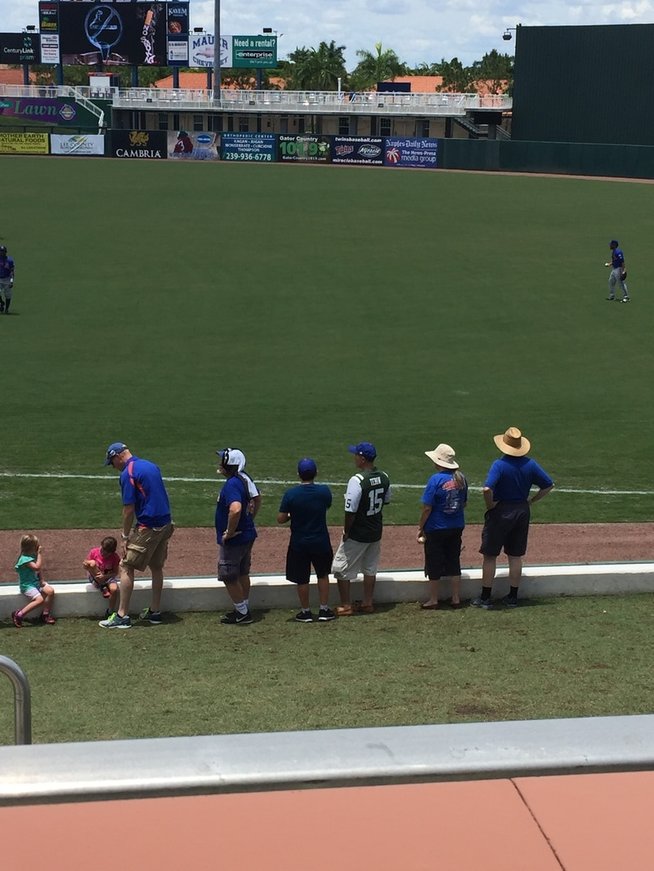 Until I possibly see him play again in a couple weeks, so long. 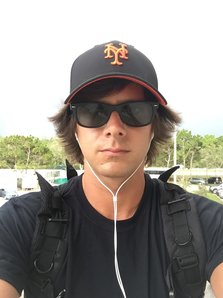 Contact me with questions or opinions regarding this article: